The Financial Overview is a roll up of the capital and operating costs per Financial Year for each Scenario.  They are compared against an imaginary BAU which is essentially all of the infrastructure that is not allocated to a scenario.

The BAU row shows the total spend in each financial year.  Each additional row represents a scenario and includes three numbers (top to bottom):

Furthermore, the costs are visualised as a stacked column chart representing the total costs.  These let you explore how various categories of costs change over time.  During a cloud migration you'll see some costs reduce while others increase.  In general you can expect that during a period of transition there is an increase in cost followed by a commensurate overall reduction in costs after the transition.  Capital costs in each financial year are included as a component. 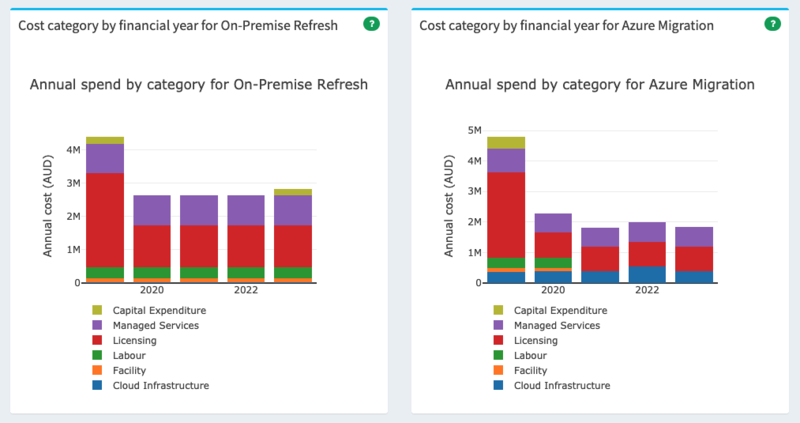 The financial overview illustrates any variance from business as usual (BAU) for the same financial year (FY). Under each Scenario a difference is identified. This is calculated as follows: Scenario - BAU = Difference.

The percentage displayed is the percentage difference (either an increase or decrease) from the BAU figure and is calculated as follows: Difference / BAU * 100 = Percentage.

In this example we identify an increase of 44% above the BAU expenditure for the year 2020 for the Azure Migration Scenario.